Today's guest at my Author Spotlight post is Ms K. J. Charles, author of the historical MM romance. I've read and quite enjoyed book 1 in the Magpie series, The Magpie Lord, and will be reviewing it on the blog soon. In the meantime check what she shared about Japan, musicals and Terry Pratchett :) 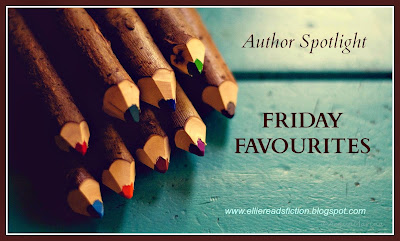 
1. Favourite place
I love Japan; I recently spent time with friends on the outskirts of Kyoto, right into the hills, in cherry blossom season. It was wonderful. Closer to home, I love Cornwall too; the light is different there, and the way it slides from beauty to menace explains why it’s such a compelling place for writers. (I set much of Jackdaw in Cornwall.) London, where I live, is a rancid overcrowded filthy pit of exploitation, greed and poverty spiked with genius. There’s a Terry Pratchett line about Ankh-Morpork that sums up my feelings about London:

“Citizens hate living there and, if they have to move away on business or adventure or, more usually, until some statute of limitations runs out, can’t wait to get back so they can enjoy hating living there some more.”

2. Favourite food and drink
Again with the impossible questions. If I had to eat one cuisine for the rest of my life it would probably be Vietnamese. Bright, clear flavours full of herbs and zing. But the best meal I’ve ever had was probably sushi at a fish market in Hokkaido, with everything fished right out of the water. Perfectly fresh sea urchin…we ate that meal in, what, 2006, and I still salivate thinking about it.

3. Favourite music/genre/artist/song
I love musicals. Guys and Dolls, Singin’ in the Rain, anything by Cole Porter or Sondheim. I’ve seen four different productions of Sweeney Todd, the last one with Michael Ball and Imelda Staunton twice because it was jawdroppingly good. I could listen to the soundtrack of that forever.

4. Favourite movie/TV series
I’ve, uh, never seen The Wire, Game of Thrones, or Breaking Bad. I have two kids and, till recently, two jobs, something has to give. Favourite movie…Casablanca and Some Like it Hot are both pretty perfect.

5. Favourite hobby besides writing, if you consider writing a hobby

We are passionate supporters of the Saracens rugby team, so I guess “screaming my lungs out in the rain while watching huge-thighed men collide forcefully”…actually, that’s a pretty good hobby, isn’t it?

Favourite books -
Bridge of Birds by Barry Hughart. One of the great fantasy novels ever, set in a magical ancient China. Funny, compelling, scary, incredibly moving, light-handed and superbly written. Everyone should read this book. The ending is magnificent.

Georgette Heyer: Okay, one isn’t possible. The undisputed queen and indeed inventor of the Regency romance, and a plotter of superlative skill. These Old Shades is a classic alpha hero with lots of period detail and adventure; The Unknown Ajax is a gloriously structured comedy that makes me cry with envy; Cotillion has the most beta hero ever written, a negligible, disregarded fool of his family, and his love affair is outstanding and hilarious.


Terry Pratchett. I am a massive fan of Pratchett, who flew the flag for genre fiction as few ever have. He wrote brilliantly in an often mocked genre, with passionate moral and political convictions. Again, it is impossible to choose, but Thief of Time and The Truth and Going Postal are three of my favourites. And Reaper Man. And Hogfather. And Wyrd Sisters. Oh, just read them all.


Queer romance: Ohhh, again with the lists. Glitterland by Alexis Hall is tremendous, real and moving; The Salisbury Key by Harper Fox is a terrific thriller romp; Widdershins by Jordan L Hawk might have been written directly to my specifications. Actually, I glom anything by all three of those authors, along with Ava March’s Regencies and EE Ottoman’s steampunk. 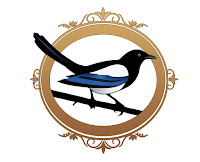 
KJ Charles is a writer and freelance editor. She lives in London with her husband, two kids, an out-of-control garden and an increasingly murderous cat.

KJ writes mostly romance, gay and straight, frequently historical, and usually with some fantasy or horror in there.

K. J. Charles latest release, A Fashionable Indulgence is coming out this August. 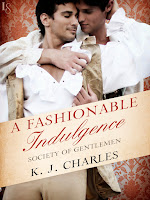 A Fashionable Indulgence (Society of Gentlemen #1)

In the first novel of an explosive new series from K. J. Charles, a young gentleman and his elegant mentor fight for love in a world of wealth, power, and manipulation.

When he learns that he could be the heir to an unexpected fortune, Harry Vane rejects his past as a Radical fighting for government reform and sets about wooing his lovely cousin. But his heart is captured instead by the most beautiful, chic man he’s ever met: the dandy tasked with instructing him in the manners and style of the ton. Harry’s new station demands conformity—and yet the one thing he desires is a taste of the wrong pair of lips.

After witnessing firsthand the horrors of Waterloo, Julius Norreys sought refuge behind the luxurious facade of the upper crust. Now he concerns himself exclusively with the cut of his coat and the quality of his boots. And yet his protégé is so unblemished by cynicism that he inspires the first flare of genuine desire Julius has felt in years. He cannot protect Harry from the worst excesses of society. But together they can withstand the high price of passion.

Enjoy an exclusive exceprt of A Fashionable Indulgence.

Young radical Harry Vane is being turned into a gentleman. Julius Norreys, exquisite, has the job of making Harry fit for society, and isn’t very happy about it.


Harry adjusted his position hastily. If Julius was a strict taskmaster in other areas he was impossible when it came to horses. But Harry could feel himself improving, his body learning the required posture and movements under Julius’s laconic instructions. It was obvious even to his ignorance that Julius was a magnificent horseman. He seemed brighter on horseback, warmer, less untouchable, and his body moved as though it was at one with the powerful beast that surged between his legs.

Harry had a certain amount of trouble not staring at Julius anyway, and it became particularly difficult when they rode. The regular motion of the bay mare under him was stirring, granted, but there were also the soft, close-fitting doeskins that outlined Julius’s thighs, and the fact that his daily habit of riding had given him a remarkably taut arse.

That was not something Harry should be thinking about. He was living in a dream of wealth and privilege, and he couldn’t imagine a worse awakening than to be packed off in disgrace for making an ill-judged approach. Sporting with men had to be left in the past, along with poverty and politics. Harry wasn’t going to do anything about his errant urges except in the privacy of his bedroom, where he had spent furtively and frantically into a handkerchief more than once to thoughts of an imaginary Julius. Still perfect, still crystalline, still relentlessly commanding, but in Harry’s fantasy he was all the things the real man would never be. Willing and hot and wanton and needy, and—
“Seat.”

—and a great deal less critical of Harry’s abilities.